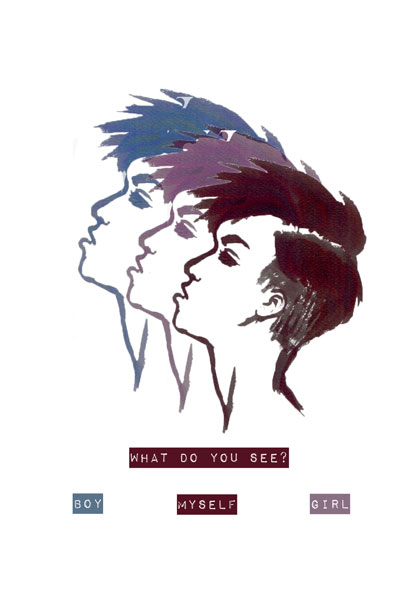 DASH has teamed up with the talented London College of Fashion fashion illustration students  to create a train of thought regarding the topic ‘Gender / No Gender’ to be expressed visually in an illustration underlining the upcoming artists’ style of line. After Dominika Drotos, this week we feature work by Federica Micheli. About her illustration she says:

‘Coming from a conservative country like Italy I had the chance to study how gender roles are still affecting our everyday life. I identify myself as female, but I also believe that this word is just something someone could use to describe me, but not define me. While researching I spoke with drag queens, transgender and all kind of people and learned how fashion can be an amusing tool with which someone can find or hide him/herself. At least that should be the fun part of it. To be able to transfigure what nature determined and let your inner being been shown on the outside is such a powerful thing in a way – for most of us – having grown up surrounded by traditional gender stereotypes, while society is constantly trying to classify us or to put our essence inside the ‘gender’ box. Nowadays what we want the most is to be recognised as human beings instead of being labelled, and with fashion we can play with ambiguity, crashing the walls between sexes. Fashion and society should be democratic, as gender is as important as colour, shape or season. My research led me to Ruby Rose, former Australian model and actress with a playful attitude towards gender classification. Her beautiful features and ability to express herself while playing on the edge of sexual barriers made her the best muse for my illustration.’