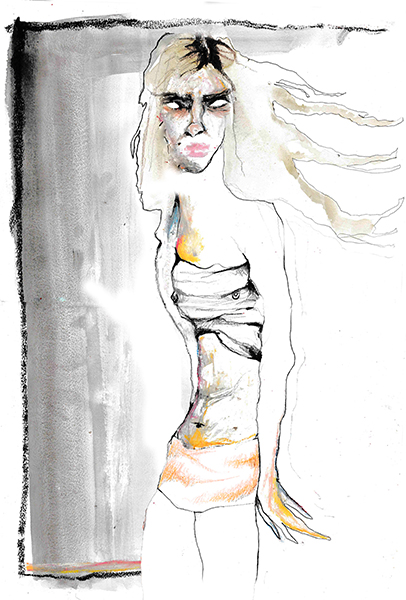 DASH has teamed up with the talented London College of Fashion fashion illustration students  to create a train of thought regarding the topic ‘Gender / No Gender’ to be expressed visually in an illustration underlining the upcoming artists’ style of line. After Dominika Drotos, and Federica Micheli, this week we feature work by Josie Payne. About her illustration she says:

‘Regarding the topic of gender in the fashion industry I chose to move away from the mainstream media representation of ‘gender bending’ with a lot of the focus being on Caitlyn Jenner at the moment. Instead, I used Australian model Andreja Pejić as my muse and a particular image that stood out for me was his feature in Candy magazine. My style of drawing tends to exaggerate features of both face and body with an androgynous feel – so I think this image lends itself really well to the way I draw. Andrej has described himself as ‘living in between genders’ and this was definitely one of the main factors I aimed to represent through my illustration.’