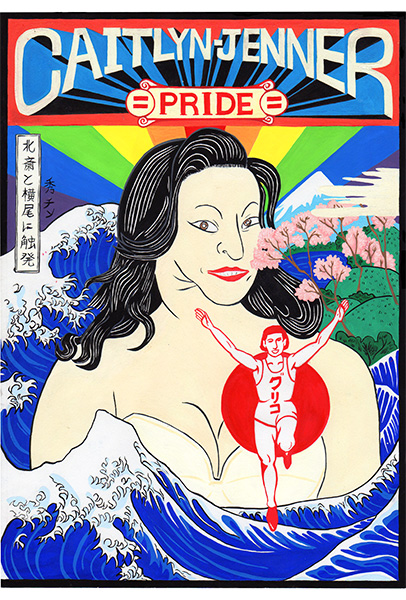 DASH has teamed up with the talented London College of Fashion fashion illustration students  to create a train of thought regarding the topic ‘Gender / No Gender’ to be expressed visually in an illustration underlining the upcoming artists’ style of line. After Dominika Drotos, Federica Micheli, Josie Payne, Kit Skellington and Robson Stannard, this week we feature work by Xiuching Tsay. About her illustration she says:

‘I portrayed Bruce Jenner, as he has become a global inspirational transgender, with Japanese drawing style, as I would like gay rights to become successful in Asia, just like LGBT and to marry with the same sex is legal in America and some European countries while, in Japan people still calming for gay rights and the television media still does not adhere for homosexuality: There are still very few lesbian or gay characters in Japanese TV, whereas a lot of independent publications such as Y comic like to share homosexual contexts. There are a lot of people that would like to be accepted for their sexuality. Jenner is an icon of LGBT victory, meaning there is hope that one day gay people will be accepted in every country and community. Inspired by two Japanese artists; Katsushika Hokusai and Tadanori Yokoo, I used the following elements:

The Wave: The impetus use of the wave in my drawing represents the movement in Bruce Jenner’s life that eventually he decided to change his sexual orientation.

Glico Logo: The slogan of Glico is ‘A Wholesome life in the best of taste.’ I came to the decision of using this logo as it is oriental while showing a depiction of a champion, and Bruce Jenner once took part in the Olympics.’