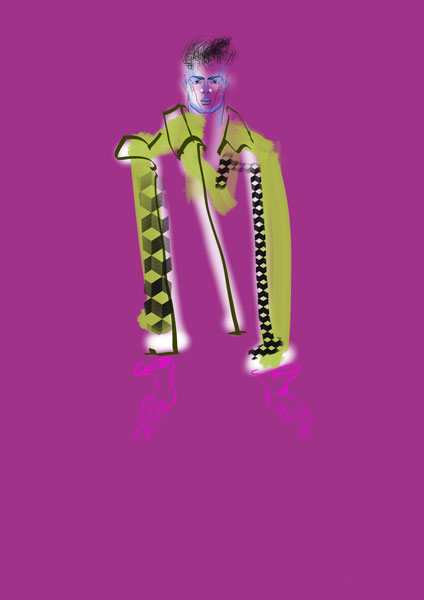 Agi & Sam Men’s Spring / Summer 2017 collection was inspired by gender roles that were switched at the show, where male models showcased looks with feminine touches. Most of the models dawned multi-coloured gloves and wore floral facial embellishments. Some of the looks were quite masculine in terms of cut and demonstration but that was all softened with a pop of colour or print, whether very evidently or just as the inside layer of a coat. Some of the looks portrayed a genuine gender exchange with headscarves, culottes, ‘grandma’ collar long line coats, short jackets and brooches. Check pattern was consistent in the collection whether it was bold and distinctive or faint and delicate. There was a major element of cow skin jackets, inspired by one of the designers’ father, who was actually bitten by a cow when he used to work on a farm. Story goes he then become a househusband and his wife was the breadwinner. The collection is even more personal hence it is portraying the story of gender roles so well.