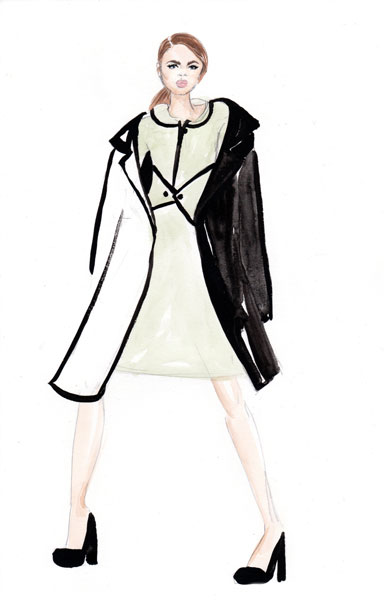 Inspiration can be taken from a variety of places, so it comes as no shocker that for his Autumn /Winter 2017 Fantôme collection, Malan Breton lay his eyes on Sir Charlie Chaplin and his films to create a sleek ensemble of elegant pieces. The New York-based designer incorporated in his thinking the comedian’s essence and his pledge to bring hope and joy to a time of darkness, linking this thought process to the current state of Amercia and its loss of liberty and creativity. Within this London collection, Breton shows homage to the reminiscence of Imperial China, specifically its water colours and imperial prints.

Breton’s incorporation of essences of his roots through British Heritage tailoring and design details of Taiwanese pagodas, using a mixture of wools, cashmere, angora as well as silks and velvets within dominant trouser suits paired with hats and bow ties round off to create a powerful Malan Breton woman. Additionally, sequin sheer gowns and lazer-cut leather dresses, attract the viewers’ eyes, to appreciate the human shape and form. Enhancing his creative vision further the collection sees men wearing skirts and patent gloves finished off with knee high socks and elegant double-breasted biker jackets.

The colour palette of Breton’s collection covered besides black a variety of greens, golds and pewters reminiscing Imperial China. Finally the collection was underlined by make-up and hair commemorating the masculine aesthetic of the 1930’s with a side parted sleeked hair do and a female glamour 1930’s dark eye look.