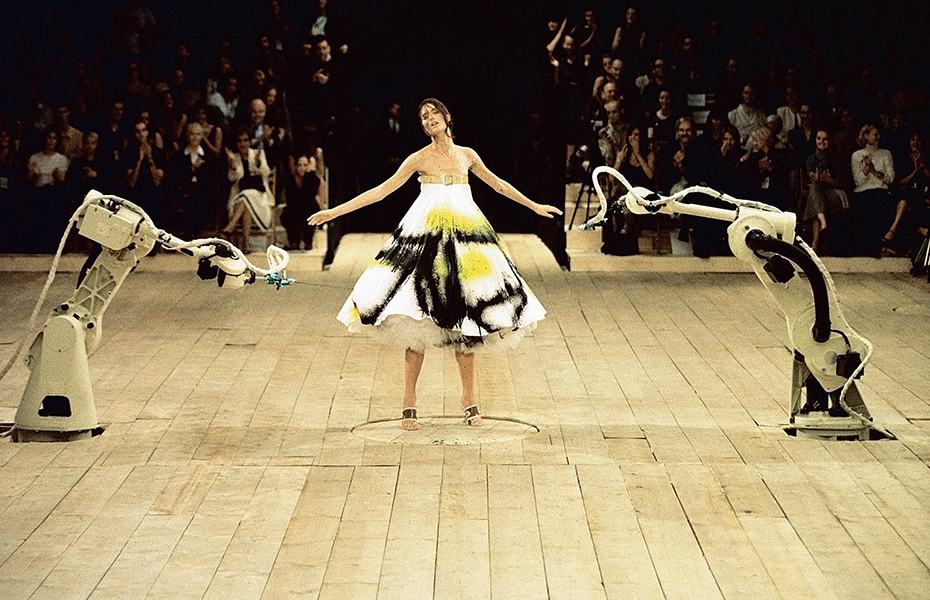 As part of the Victoria and Albert Museum’s series of Savage Beauty events, fashion journalist and critic Alexander Fury sat down with Alexander McQueen’s main set designer and longterm collaborator Joseph Bennett to discuss the behind-the-scenes antics of those theatrical shows. Credited as the man responsible for bringing McQueen’s lavish ideas to life, Joseph Bennet is a name everyone must know, more so now than ever as he lent his hand in designing the ‘Savage Beauty’ exhibition in both the New York’s MET and the present exhibition in London’s V&A. During the captivating talk, one couldn’t help but wonder, how would McQueen feel knowing that all the secrets behind his haunting yet dreamlike shows were being spilled?

Bennet began working with McQueen on the S/S99 show titled ‘No 13′ and continued to work with him from then on. Having previously worked in music video production, and not so much within fashion, ‘No 13′ proved to be a big first hit and a favourite McQueen moment amongst many. The finale featured a young Shalom Harlow wearing a double-belted voluptuous white dress that was slowly and aggressively spray-painted by two robots that looked like they had a consciousness of their own. That ‘happening’, inspired by artist Rebecca Horn, is now etched into everyone’s visual memory and one can see that same dress at the centre of the room entitled ‘The Cabinet of Curiosities’ in the V&A’s exhibition. Bennet is also the producer who helped McQueen physically realise shows like ‘Horn of Plenty’, ‘Voss’ or ‘Plato’s Atlantis’ and created the lifelike Kate Moss ghost in ‘The Windows of Culloden’ show. Bennett’s anecdotes about working with Lee were heartfelt, honest and bordering on the unbelievable. The set designer spoke openly about McQueen always wanting to push ideas further, to create a narrative within a show, and to involve the audience within the experience. After learning about the number of shows that were unrehearsed, you understand that some shows could have gone completely wrong, but didn’t. “He approached shows the same way he approached cutting cloth,” Bennet said, referring to the fearlessness that was McQueen.